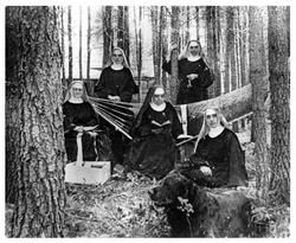 Benedictine sisters in 1900 in the forest before completion of St Anthony Hospital in Minnesota
"Sisters”:    Free online documentary from LCWR introduces five American women religious and is told almost entirely in their voices (54:16). They share stories of their families and childhoods, what drew them to become sisters, their life in community, their personal spiritual lives. Their diverse professions – as an ER pediatrician, a hospital administrator, a college administrator, a director of a nongovernmental organization (NGO) at the United Nations, and a social worker – share a common focus on social justice. Sister Carol Rittner, RSM, envisioned the story, raised the funds, and worked with three-time Emmy winner and Academy Award (Oscar) nominee Robert Gardner. Watch it or order the DVD on the LCWR website.

"Women & Spirit: Catholic Sisters in America":   Documentary (56:00) from LCWR highlights 300 years of powerful action for good. It beautifully interweaves history, anecdotes, and materials to tell how sisters played a vital role in shaping American life from colonial America on. Find out how sisters have helped new immigrants get a foothold. Read Depression-era letters that destitute parents tucked into their baby's blankets as they gave their child to a sisters' orphanage. Trace the origin of America’s school systems and health care systems back to early sisters. Much more. The DVD ($19.95) includes a film study guide, a digital version and videos of the Women & Spirit exhibit that traveled the USA, starting at the Smithsonian.

"Love in Action: Conversations with Women Religious":    Free online video (16:30) introduces the contemporary work of women religious. Three students and a campus minister at the University of San Francisco interviewed sisters to create this video. It shows the breadth of sisters’ work, the roots of their charisms and ministries, and the women themselves. They speak of "leadership with our feet on the street," emphasize that "We need to work from a place of oneness," and talk about the importance of solidarity with marginalized people as a necessary part of our own conversion.

“Overview of Spiritual Leadership”:  Free online video (37:15) with Sister Marie McCarthy outlines the foundations for a new kind of leadership. Clear, inspiring, enticing insight into a practical, creative, effective approach with perspective rooted in Gospel and cosmos. From Solidarity with Sisters’ Spiritual Leadership Conference at The Catholic University of America.

“Spiritual Leadership in Practice” and “Q&A with LCWR Leaders”:  Free online videos (43:26 and 37:35) feature important LCWR leaders in candid, personal, sometimes humorous, and inspiring conversation about the ideas and the nitty-gritty practices of leading large organizations in ways that respect differences and enable people to work with unity and vision during difficult times. From Solidarity with Sisters’ Spiritual Leadership Conference at The Catholic University of America.

"Going West on the Journey":    Free online documentary (41:02) tells of the courage and faith of the first Sisters of Mercy to come to the United States, over 150 years ago, and how sisters today continue to live in that same spirit. If you’ve heard of the “charisms” of religious congregations, this will give you a glimpse of what it means for the Sisters of Mercy. You can also read these women's powerful story of sisterhood and of hope and love in action.

“Thank You, Sisters”:    Free online video (8:08) from Father James Martin, SJ highlights what sisters do, how they live, and why they’ve made many changes since the Second Vatican Council in the 1960s.  Father Martin is a best-selling author, a popular speaker, and an editor at America magazine.

"Band of Sisters":    Download / DVD documentary (1:28) follows several US women religious in their lively, deeply rooted work for social justice work. "For Catholics who wonder what became of the nuns they knew in habits and convents many years ago, for activists who may feel profoundly discouraged given the problems of today's world, for women seeking equality in their church, and for people of all faiths yearning for an inclusive and contemplative spirituality, Band of Sisters challenges us to ask what really matters in life." Available as DVD and through Amazon, iTunes, library downloads, more.

"Trailblazers in Habits":    Documentary (65:00) is an intimate glimpse of Maryknoll sisters who have accompanied the disenfranchised in their struggle for social justice for 100 years. It "weaves together the nuns’ own affecting accounts of imprisonment and personal struggle with rare archival footage and poignant reminisces from the beneficiaries of their work."  NCR's great review calls the film "a story of hope fulfilled, a faith that continues to invite, and life lived in love for God and others in community." Purchase from Maryknoll or arrange a local showing. Watch the trailer and purchase from Maryknoll ($25).

"We Shall Not Be Moved":    90-minute documentary on the impact of churches & sisters in US Civil Rights Movement. "Eyewitness accounts combine with archival footage to offer an illuminating account of the oft-neglected but undeniably important role that churches played during the Civil Rights Movement." On Netflix and elsewhere.

"A Question of Habit":    This startling, engaging, award-winning full-length documentary film, narrated by Academy Award-winner Susan Sarandon, examines the depiction of Catholic nuns in contemporary U.S. popular culture. It contrasts these images with the lives of actual women religious, both historical and current. US Catholic reviewed this “fascinating” film which is hard to find except through Whalen Films.

Sister Pat Farrell, LCWR president, on NPR's "Fresh Air":  article and audio - "There are issues about which we think there's a need for a genuine dialogue, and there doesn't seem to be a climate of that in the church right now...  In my mind, [I want] to see if we can somehow, in a spirited, nonviolent strategizing, look for maybe a third way that refuses to define the mandate and the issues in such black and white terms."  "An American Nun Responds to Vatican Criticism" - NPR, July 17, 2012

A Quick Intro to Sisters   -   Looking Back (history)   -   What's Ahead for Sisters?   -   Charisms and Congregations
Connect with Sisters   -   Thank You, Sisters   -   Intro to the Leadership Conference of Women Religious (LCWR)
Proudly powered by Weebly