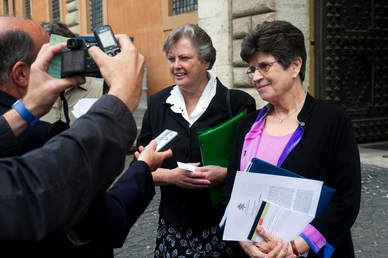 We’ve seen a radically different way of leadership during our years as companions with the Leadership Conference of Women Religious (LCWR). Early on, we’d ask the sisters about it, hoping maybe one of their bookshelves held a nice compendium of leadership philosophy, techniques, methods. Nope. They spoke of it as a “way” of leadership rooted in a way of life. They wrote three intriguing, ultimately amazing books that gave us words for our experience with LCWR.

The books and our experiences have changed our assumptions about what leadership can look like in the real world. We hope you'll experiment with it. When we do, we find that this way of leadership changes outcomes in wondrous ways. 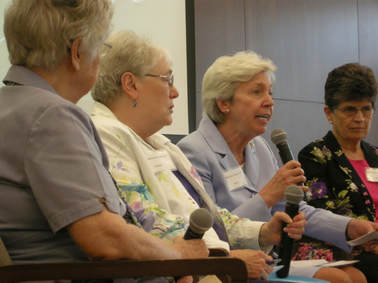 Sisters Helen Maher Garvey, Marie McCarthy, Mary Hughes, and Pat Farrell
You can see for yourself. Watch LCWR leaders at the Spiritual Leadership Conference that we co-sponsored with Catholic University’s Institute for Policy Research and Catholic Studies: (There's another great pic of all four of them laughing, which happened a lot. But I don't have the tech savvy to put both photos here. ) 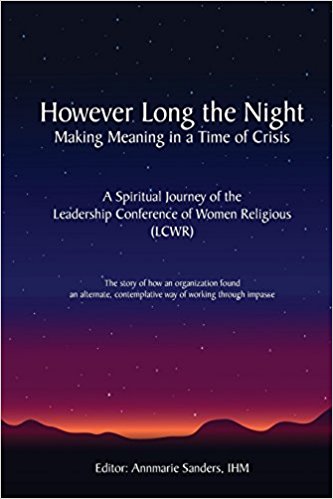 Try these quotes as a simple intro to what we’ve experienced. LCWR's  books are full of practical examples related to each theme, stories from the . experiences of these gifted leaders, principles the sisters applied, how-to examples, their learnings over time. Here are some of the big ideas:

"Our ways of leading LCWR as an organization are not common in the church, in political operations, nor in corporate and non-profit enterprises. LCWR has developed them during more than six decades of continual renewal as we have followed directives from the Second Vatican Council and later church documents. Although our ways of leadership were different, we had to deal with the same challenges that confront any leaders in crises – what goals to pursue, what overall strategies to use, when to share or withhold information within the organization and with the public, what was non-negotiable, how to find or create a solution. As women religious, we called on rich spiritual and cultural traditions. We share our learnings for your consideration as practical options that may help you to create new and better realities in your own parts of the world." – Sisters Janet Mock and Annmarie Sanders, “A Word of Hope to A World in Turmoil” in However Long the Night.

"In response to the renewal invited by Vatican II, we created participative structures of leadership and of the exercise of authority and obedience. Decision-making became consultative, participative, a collective effort to hear the voice of God’s Spirit discerned through and from the whole." There is hard work involved. We must do the homework.... It is not helpful to either rush to decide too quickly, or draw things out unnecessarily, delaying or avoiding difficult decisions. It is a conscious opening to God’s Spirit, inviting transformation." – Sister Pat Farrell, “The Gift and Challenge of Communal Discernment,” However Long the Night

"We’re called to an alertness that moves beyond the ‘stuckness’ we feel in the overwhelming trivia, the endless minor tasks that pile up on us day after day. We’re called to see them as not something to get past, but as the mystery that life gifts us with at any particular day or hour. Each thing is a piece of the mystery of how God is acting in the world. In every moment we enter into glad and practical cooperation with the energy with which God is bursting at the moment. It takes an attention to the moment and a resolution to remember the presence of God."  – Sister Marcia Allen, "The Role of Contemplation in Leadership," Transformational Leadership

“We learned to approach our decision-making and questions by asking: ‘What would it be like if…?’ This process, now well established and deeply rooted, helps us give voice to our most creative dreams, whether or not they are achievable or initially practical. From these imaginative expressions, which always sort of knock down the borders, we are able to identify our assumptions, as well as both the worst and best possibilities, and then set concrete goals. This process is now so incorporated into our community life that it can truly be called a habit of dreaming.” – Sister Constance Fitzgerald, "Pursuing Our Dreams in Times of Darkness," Transformational Leadership

"Leaders consciously perceive, apprehend, and notice with conscientious thought and observation the meaning of the challenges before them and their impact on the broader church and world in which they have a life. An active conscience guides us through such a spiritual journey with careful, upright, and dedicated reflection about what is true and just. In the process we receive a new world given by God, one not believed possible and one sometimes not preferred or chosen." – Sister Marlene Weisenbeck, “Truth-telling: On Personal and Institutional Integrity,” However Long the Night.,

"We offer three dimensions of forming and building relationships that we learned in the process: …It took discipline to listen, to seek understanding, to refuse to be either naïve or reactionary. Drawing strength and insight from the sacred scriptures as well as wisdom from other sources, we attempted to name realities, curb anger, and seek to respond in a way that served the greater good.... This process gives us hope as our nation grapples with similar complexities. – Sister Janet Mock, “Common Journey Through Diverse Paths: Developing Right Relationships in Conflictual Situations,” However Long the Night

"...This led to partnerships in a continuing conversation that became open and honest dialogue about real concerns; reverenced the essential person within the individuals with whom we engaged; and fostered truth-seeking and authentic respect for the roles each group played in the life of the church.... Above all we kept to our resolution to be faithful to continuous contemplative prayer and discernment – personally and communally." – Sisters Marcia Allen and Florence Deacon, “Relationships Matter: Nonviolence and the Pressure to React,” However Long the Night

Growing polarization and mistrust did not provide conditions for the kind of dialogue needed to weave a greater unity. There seemed to be a large-scale breakdown of communication. People tended to limit their dialogue to conversations with other like-minded people, living then in parallel theoretical worlds, seldom converging in genuine encounter or thoughtful dialogue…. Perhaps the leadership most needed in the church and the world now was to stand in the midst of apparently irresolvable conflict with perseverance and hope. Was this our new call?" – Sister Pat Farrell, “A Tapestry of Contrasting Colors: Living with Polarization, Differences, and Impasse,” However Long the Night

"Mindful that it was easy for any one of us to take a deep dive into arrogance, righteousness, or myopic perspective, we gave one another permission to monitor the movement of graces received and graces refused among us. This proved invaluable to our communal discernment and collective leadership." – Sister Carol Zinn, “Embarking on an Unknown Journey: The Responsible Use of Influence”

"Understandings, stereotypes, and perceptions were passed on and on, without critique…. This cultural chasm is much deeper than languages spoken. This has to do with 'where we stand' while viewing realities… All participants must recognize that they have only a part of the truth. A part of one’s reality resides in the mind and can be reflected on. Another essential part resides in the heart, and unless brought to the level of consciousness it will not change, but will color rational reflection. A part of our difficulty seems to be that we are not even aware of the chasm…. Deep listening to what another is saying is crucial and, beyond the words, hearing what further meaning may be there." – Sister Sharon Holland, “The Power of Secrecy and Perceptions,” However Long the Night

"The inherent danger is that one can come to believe that one’s way of being is the only way, the best way, or the right way. Diversity can enrich the church immeasurably. However, diverse experiences also hold the potential for conflict and misunderstanding…. We learned to be vigilant about conscious and unconsciously held assumptions. We learned to be even more probing in our questioning. In some challenging situations one might assume there are bridges to be crossed, but sometimes one might actually need to build the bridge." – Sister Mary Hughes, “A Spiritual Journey: What We Learned about Humility,” However Long the Night

"As LCWR was thrust into the public light, a number of temptations arose. They illuminate the types of questions an organization must continuously discern while going through a similar difficulty:
Temptation #1: Allow the situation to be played out in the media as a story of conflict....
Temptation #2: Accept all opportunities to tell the story wherever we can and to whomever will listen....
Temptation #3: Just let others tell the story....
Temptation #4: Correct all erroneous statements....
Viewing one’s own situation in relation to a larger whole, attending to movements of the Spirit, identifying how a matter affects the individual, and dealing appropriately with the emotions that arise are key to successfully communicating publicly about a difficult matter with integrity and effectiveness." – Sister Annmarie Sanders, “Making It Through the Long Night, Publicly: Managing Public Information During Crises,” However Long the Night

And, last, from the chapter that LCWR invited us (Solidarity with Sisters) to write for However Long the Night:

"LCWR’s transformational leadership flows from a unified way of being. Now we could name many intertwined roots of the nonviolence that had puzzled and intrigued us at the beginning of our relationship with LCWR. We connected words like contemplation, discernment, dialogue, meditation, community, work in union with people who are marginalized, welcoming of minority views, prophetic voice, and spiritual or transformational leadership…. Many people seem to search for spirituality on their own, without being part of a community questing to live simultaneously in God and in the world. We wish for others to have the remarkable experience of journeying through life in companionship with Catholic sisters or with other people as grounded, mature, and full of grace." – Solidarity with Sisters, “Discovering Fresh Possibilities in Unexpected Places: Applying What We Witnessed to Our Lives,” However Long the Night

And please don’t stop here. The whole book is full of insight. The earlier books are, too.

More ways to do something for justice and peace:

Active Love   -   Catholic Social Teaching, and Conscience   -   What Is Solidarity?