Timeline of religious life through the centuries:    Quick, colorful overview.

History of the Leadership Conference of Women Religious 1950-2011.

Timeline of the Doctrinal Assessment of the Leadership Conference of Women Religious from 2008 through the Joint Final Report in 2015. (The timeline begins by noting a separate Vatican action, the Apostolic Visitation of some congregations of US women religious, and omits its positive conclusion in 2014.)

Recent History with the Vatican:
a challenge, a spiritual journey, many steps forward 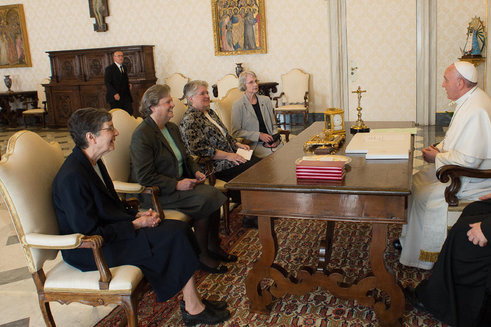 Pope Francis with Sisters Joan Steadman, Janet Mock, Carol Zinn, Marcia Allen
However Long the Night: Making Meaning in a Time of Crisis: A Spiritual Journey of the Leadership Conference of Women Religious -- This first-person book, by LCWR presidents and leaders, tells an intimate and powerful story of LCWR’s learnings during the years of the Vatican doctrinal assessment and mandate (2009-2015).

At left -- Pope Francis met with LCWR officers in April 2015 and expressed appreciation for sisters' lives and ministries.

The Vatican ended the 3-year oversight of LCWR in April 2015 with the Joint Final Statement signed by LCWR, the bishops delegate, and the Congregation for the Doctrine of the Faith. Through faith, dialogue, and patience, a difficult time ended in mutual respectful resolution.

The Power of Sisterhood: Women Religious Tell the Story of the Apostolic Visitation – What happened for Catholic sisters during the Apostolic Visitation of 2008-2015? Margaret McCarthy, Ph.D. and Sister Mary Ann Zollman (former LCWR president) surveyed congregational leaders to find out. Their book is a research report on transformation: “It was about all of us together…. It created a sense of solidarity and sisterhood. And the same was true with our relationship with the laity – we discovered a communal vision for the church and the world.” "It started out to be a horrendous thing. But we learned to walk through the darkness together. . . . It was a powerful time.”  Also, the church teaches the equality of women – "But when women talk about this idea, try to develop and explore this idea, it’s called radical feminism. It seems that in Rome, there’s only one form of feminism, and that’s radical feminism. This engaging book is relevant to all of us who want to understand how people can create positive outcomes in situations of conflict. And here’s an audio (54:03) and transcript of a thoughtful, personal interview with the authors by Mary E. Hunt, feminist theologian and co-founder of the Women’s Alliance for Theology, Ethics, and Ritual (WATER).

Sisters Changed after the Second Vatican Council:
They renewed roots and transformation grew.

"Into the Future: The Journey of Women Religious since Vatican II" – Sister Nancy Sylvester’s article in America magazine (7/16/2012) describes the prayerful, painful, joyful transformation that began with the Vatican Council II (1962-1965) and continues today.

Perfectae Caritatis: Decree on the Adaptation and Renewal of Religious Life (English: Complete Charity) – In obedience to this pivotal 1965 instruction from the Second Vatican Council, LCWR & US Catholic Sisters prayerfully renewed their understanding of their congregations’ roots and charisms, in order to to live them fully today. "We changed in obedience to the Church," wrote LCWR former president Sister Doris Gottemoeller in her memories of being in Rome for its issuance (published 2012 in the US Catholic Bishops' blog).﻿

An enormous 1967 database about 140,000 individual sisters’ views about theology and social changes is now available online. Soon after the Second Vatican Council, Sister Marie Augusta Neal conducted a survey of American women religious in active ministry. Global Sisters Report provided context and a quick glimpse. (A note about the database title: The 1967 organization “Conference of Major Superiors of Women” later renamed itself as LCWR. Still later, a group of LCWR members formed a new, separate Conference of Major Superiors of Women.)

Catholic Sisters Have Been Leaders in US History 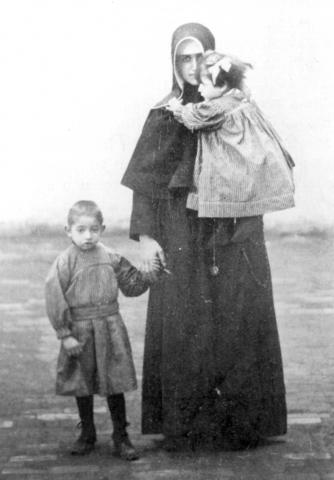 This list is just a hint. There’s much more in Sisters – Videos.

"Sisters' History is Women's History" – This is an excellent, substantial, illuminating look at women religious who have been pioneering leaders for hundreds of years, and a convincing case for the nexus between the constraints on and contributions of women religious and women in America more generally. Essay by Syracuse University professor Margaret Susan Thompson in Journal of Women's History, Volume 26, Number 4, Winter 2014, pp.182-190.

“Catholic Nuns and Social Justice 50 Years On” -- How did the Selma march (March 1985) led by Dr. Martin Luther King, Jr., change women religious in the USA? How did the participation of women religious in the Selma march change the US civil rights movement? In her excellent historical overview, Avila University professor Carol K. Coburn writes, "Interviewing Dr. King about the sisters’ participation, journalist John L. Wright Jr. wrote that King believed the ‘participation of the nuns in the Selma demonstrations ‘had a special significance’ in arousing the national conscience to the plight of the Negro because the public knows a nun to be a woman of ‘great sacrifice and dedication.’” As Wright reported, King believed that the presence of religious people “identified the church with the struggle . . . in a way that has not existed before and has made it clear that civil rights is, at the very bottom, a moral issue." And how did this experience and others during that time affect women religious? Carol Coburn continues: "The ministries of Catholic sisters exploded into a vast myriad of programs and services focusing on the marginalized of society and the signature social justice issues of the 20th century. Armed with graduate education, real-world experience and the spirit and documents of the Second Vatican Council, many American nuns began an even greater transition into the public sphere, expanding social justice ministries beyond institutional borders."

“The Union's top military nurses were nuns” – Civil War work by women religious had many impacts. "'The work of the sisters really changed the view of Americans of Catholics in general,' said Kathleen Washy, who until recently was the archivist at UPMC Mercy. 'There was a lot of anti-Catholicism in the United States leading up to the Civil War, but people got a very different view when they had a nun taking care of them after they were wounded.'" For example: after the battle of Gettysburg, "the first dozen sisters entered Gettysburg early July 5. Along the road they saw bodies and dead horses.... The town of 2,400 was overrun with 21,000 wounded men, every building serving as a hospital. Three dozen sisters served over several months.... The government paid for the sisters to share a room at what is now the Gettysburg Hotel and gave them food. They were entitled to wages, but refused to accept them.... Throughout the war sisters earned a reputation for competency and courage, staying to tend victims of typhoid and smallpox when others fled." Sister Betty Ann O'Neill's book on the Daughters of Charity as nurses during the Civil War includes sisters' diaries and memoirs.

Black Sisters: A hard past, a changing present

The Untold History of Black Nuns in the United States is an illuminating 21-minute interview with Dr, Shannen Dee Williams who has spent years researching the historical experiences of Black women who wanted to become Catholic women religious in America from the 1600s to the mid-20th century. Her work has made today's sisters deeply aware of widespread past racist practices among congregations of women religious. (The interview begins at 10:35 in America's award-winning podcast, Jesuitical.)

LCWR's 2016 annual assembly included a powerful presentation by Dr. Williams that was followed by an expression of sisters' profound contrition for this sinfulness and then a communal ritual of commitment to combat racism within congregations, within sisters' hearts, and within society. Since then, more congregations have asked Dr. Williams to research their own congregations' complicity in racism.

Other research has highlighted the pivotal role of Black Catholic sisters in forming a spirituality that enabled others to be authentically both Black and Catholic. The National Black Sisters Conference, founded in 1968, has additional information. The National Black Sisters Conference, at its 2018 annual meeting, noted that there’s been progress (“…in 1968, only three of the sisters in the sisters' conference were in leadership in their communities and there was only one black bishop in the United States. Today, there are nine active black bishops and seven more retired, and most of the sisters are either in leadership or have been in the past.") -- but the Catholic Church is still “reluctant to embrace its black members" and “black Catholics must continue fighting to make their voices heard.”

"Being in Communion - Standing against Racism" was the focus of a public action and a resolution at the LCWR 2018 Assembly, re-emphasizing commitments made in 2016. Women religious are tireless in this work, with a renewed urgency as they continue to learn about racism in their own congregations. A pioneer was Sister Thea Bowman, the first African-American to join the Franciscan Sisters of Perpetual Adoration in La Crosse, Wisconsin, who died of cancer in 1990 at age 52. The US Bishops expect to approve her first step toward official sainthood at their meeting in November 2018. An excellent article on her life says: “Arguably no person in recent memory did more to resist and transform the sad legacy of segregation and racism in the Catholic Church than Thea Bowman of the Franciscan Sisters of Perpetual Adoration, a scholar and public speaker who inspired millions with her singing and message of God’s love for all races and faiths. Sister Thea awakened a sense of fellowship in people both within and well beyond the Catholic world, first and foremost through her charismatic presence. But she also did it through her willingness to speak the truth about racial injustice in society and the church and through her remarkable ability to express such truths in the context of God’s universal love.”

Sister Thea saw Catholicism's tremendous potential to forge healing relationships across the color line. And she didn't appreciate being seen as a “saint.” “I know people are looking for sources of hope and courage and strength. I know it’s important to have special people to look up to. But, see, I think all of us in the church are supposed to be that kind of person to each other.”

A Quick Intro to Sisters   -   Videos, Etc.   -   What's Ahead for Sisters?   -   Charisms and Congregations
Connect with Sisters   -   Thank You, Sisters   -   Intro to the Leadership Conference of Women Religious (LCWR)
Proudly powered by Weebly