Actions by Solidarity with Sisters 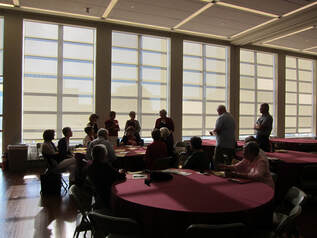 Solidarity with Sisters doing final coordination before 2014 Spiritual Leadership Conference - Photo thanks to Jim De Quattro
The list below tells only a tiny part of our story. Much more important is our personal and communal transformation (really, that's the right word) through these years of companionship with the Leadership Conference of Women Religious (LCWR) and with each other. That story is in our chapter in LCWR's book However Long the Night: Making Meaning in a Time of Crisis. We inspire and impel one another forward through our regular Solidarity with Sisters' meetings. our strong relationships with women religious and LCWR, and the communal prayer to which we welcome you anytime.

May 29, 2012 - Rally in support of LCWR with about 220 participants, followed by our meeting with the Papal Nuncio to the USA at which he agreed to dispatch to Pope Benedict XVI our letter asking for an end to the LCWR mandate

Early June, 2012 –First meeting with the sisters at the LCWR national office (we hadn't even known it was near us).  We asked to bring them our rally materials, they opened the door, and we began lasting friendships.

June 12, 2012 - Prayer for LCWR with the Papal Nuncio at the Vatican Embassy

Summer 2012 – Expansion of website, including “Thank you, Sisters” online form; we sent each entry to the named sister’s congregation

January-June 2013 – Greeting cards to all active US bishops asking for support for LCWR; three different cards, for Epiphany, Lent, and Pentecost

August 2, 2013 – Prayer service for LCWR 2013 Assembly with the Papal Nuncio at the Vatican Embassy

Summer 2015 – Wrote discussion questions for LCWR’s 2015 book Transformational Leadership; they were published on LCWR’s and Orbis websites and on ours.

Summer 2017-March 2018 – Wrote chapter for LCWR book However Long the Night and helped with book preparation in other ways.

Lent 2020 - Weekly gatherings for contemplative prayer to which we invited others.  We moved from a chapel to Zoom online in response to coronavirus.

March 2020 and for the foreseeable future - Right now we seek to create space for the Holy Spirit to work in this time of pandemic and national urgency for a just and merciful society.  To make the Gospel visible, and to fuel the vitality of the Body of Christ, we create communal, interactive, contemplative times of prayer, readings, quiet, and sharing every week on Zoom (Sunday gatherings 10:30 AM Eastern; contemplative space on Tuesdays at 7:30 PM and Wednesdays at 2 PM).  With dozens of people from all over the USA and beyond, we experience communion in God and with each other.  Read examples, or email us if you'd like to know more.