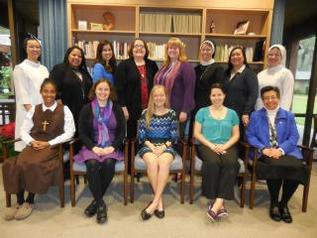 Younger women religious who authored "In Our Own Words: Religious Life in a Changing World," including LCWR past president Sister Teresa Maya at lower right.
Catholic sisters are the most realistic and most hopeful people we’ve ever encountered. Here are realities and visions:

The primary context in which women religious look ahead today is the same as it’s been for centuries: what are the needs of this moment in time, and how is God calling them to respond? That permeates their thinking and writing.

A further context is change in demographics, documented in major studies (2015 quick facts, 2014, 2013, and earlier). A big bulge in vocations in the mid-twentieth century was way out of line with historic figures, but large numbers of sisters became a cultural expectation for the generations of US Catholics who grew up with that reality. Those numbers also enabled sisters to build and expand a wide range of institutional ministries, particularly in education and healthcare. The drop in numbers since 1970 has been steep. Some women left religious life as new avenues opened for both lay ministries and professional lives. Now, as elderly women religious die, the number of new entrants does not replace the elderly sisters who have left ministries and are dying.

Newer members and older members are vibrant with vision and confidence that in God they will discover where they are to go. A great overview comes from Sister Teresa Maya -- both a younger sister and a national leader, past president of LCWR: "What religious orders can do today to thrive."

Younger sisters speak about their lives in the book In Our Own Words: Religious Life in a Changing World. With Sisters Juliet Mousseau and Sarah Kohles as author-editors, this beautiful book was written by thirteen younger women religious from different congregations, charisms, ministries, and histories. The authors share profound and very personal perspectives on the life they've chosen and why they've chosen it, addressing topics like vows, community life, individual identity and congregational charisms, and leadership by younger members of a congregation. "It was just a real feeling of communion and of being one as we worked on this," said one author in Dan Stockman's review in Global Sisters Report. "That's our future." Another observed that the book is "13 younger sisters grappling with how to live this life now, what it means to say yes to this, and knowing what we are saying yes to is very different than what previous generations have said yes to. We're not reinventing religious life, but connecting with our experience of religious life."

Sister Teresa Maya's presidential address to the 2018 LCWR Assembly ("Comunión 'En Salida' [Communion Going Forth] -- An Apostolic Call for Our Time in Religious Life") underscores both readiness for change and the constancy of communion as a foundation for women religious. "We have been divesting, dealing with property, decluttering, arranging for the care of our members. Is this our principal call as leaders of religious institutes at this time?... It is not enough!... Our mission as leaders for this time is as simple as it is ancient: community. This is what we do best; this is what we have always done through all our ministries. We lead for community. There is nothing more important, more radical, more necessary for us than to lean into our apostolic call to nurture and foster community wherever we find it, wherever we are, with whatever means we have…. Young women are choosing to live with us, to embrace our charisms, to make vows in our communities. There is a new vibrancy in our ranks, not confined to our institutes. The intercongregational nature of the conversations younger people are having is one of their gifts!... We are no longer the ones that will open a new hospital, college or social services agency. We have empowered the next generation of lay ministry leaders to do this.... The heart of our apostolic identity is community. We are women who nourish, encourage, and create community. Community does not happen on its own, it requires leadership.... Collaboration is the only way forward for our communion. Our world is desperate for this witness. Hope is the gift of communion!”

Sister Mary Pellegrino’s presidential address to the 2017 LCWR Assembly (“The Future Enters Us Long Before It Happens: Opening Space for an Emerging Narrative of Communion”) urged leaders to forge ahead with the repeated refrain, “Consider what God and humanity are asking for today…” She introduced the theme of communion as central: “Our work in is to let the former things pass so that the future – already in our blood – can happen…. The grace that will come from embracing this paschal narrative of communion, will be costly but it will not diminish us. It will take our best energy and will not consume us. It will open us to the vitality that lies deep at the heart of communion with God, with one another and with the wider world. It will remake us. And we will remake the world.” All addresses at that Assembly led toward communion. Sister Constance FitzGerald’s address (accepting the LCWR Outstanding Leadership Award) resonated very deeply with LCWR members: “We have got to open ourselves to the challenge of living through Jesus Christ into the vibrant life of Trinitarian communion and allow this radiant pattern, this orientation toward relationship, to permeate and transform our consciousness.”

Sister Marcia Allen’s presidential address to the 2016 LCWR Assembly (“Transformation – An Experiment in Hope”) documents the drop in numbers, puts it in context, and shifts the focus from loss to transformation. She looks back to the sisters who pioneered the American west: “What was considered traditional ways of doing things did not hold up under the exigencies of the moment. Traditions were reinvented. Charisms survived; purpose survived, but all of the customs and homey expectations of the east were left behind. In the face of the necessity to survive and to serve in some meaningful way, a new life was, in fact, invented. “ “Transformation is the new normal – every system of which we are a part is in this process of changing form, nature and/or function. We must enter the mystery of it all and engage in the experimentation and exploration and creativity that it requires to live this 21st century mystery.” Sister Janet Mock’s keynote address at the same Assembly, “Surprised by Joy: Springs from the Great Deep Illuminating Religious Life,” underscores the gift of this time: “Your task is discerning where and how to be in communion with the activity of God in our world now, at this present moment…. The activity of God is with the risen body – being a presence, living with moral authority, and always, always with and for the poor.”

“Changed, Not Ended: A view of religious life from a young sister” – "Religious life is not in decline; it is simply changing. And it should change," writes Franciscan Sister Julia Walsh, the youngest member of her community, in America magazine. She shares the joy and insights of a recent Giving Voice gathering of young sisters from across the country, the pleasures of inter-generational living, the call to the margins, and why she loves religious life. "I love being a sister because I am permitted to be the best version of myself within a community of like-minded, prayerful women. In my community I can focus on what I care about—social justice, learning and art—and the community allows a lot of room for growth. The religious vows, prophetic in nature, free me to move to the edges and encounter God in new realms. This vocation creates opportunities to live a life of radical simplicity, solidarity and accompaniment with those who are oppressed. Many young sisters share eagerness for this type of Gospel living; we want to be where few others are willing to go."

Increasing collaboration of many kinds - A spirit of communion is increasingly obvious in structures of religious life.
What will religious life look like? – Sister Linda Romey thinks out loud. Follow Global Sisters Report for more.

Catholic Sisters Are Women of Spirit

Abounding in Kindness: Writings for the People of God by Sister Elizabeth Johnson invites reflection on faith, God, Jesus, and church. The author is a major theologian whose clear language welcomes everyone to discover wider horizons and deeper meanings in Scripture and church teachings. A beautiful, engaging book. (2015)

Claiming Our Truth: Reflections on Identity by US Women Religious, edited by Sister Nadine Foley (1989) is an older book that I still think is rich and wonderful, and free online. The authors, all women religious, explore both theology and community through incarnation, mission, change, and deeply personal ways of awareness, presence, and praise for sisters as women – and so their reflections resonate with all of us, particularly women, as we name our identities in context of faith and church.

The Unbearable Wholeness of Being: God, Evolution, and the Power of Love – Sister Ilia Delio builds on both science and theology to make a case for love as the source and goal of the evolutionary process. To the degree that we open ourselves to Love’s action and experience the oneness of all creation, we too can become agents for healing in our personal lives and far beyond. “Evolution is not background to the human story; it IS the human story and love is the energy of all life. Evolution rests on the power of love because what ignites the core of being is ultimately unitive and transformative.” (2013)

A PS with international perspective

Catholic Women Speak:  An international group of well-known and unknown Catholic women, including some sisters, wrote this book to bring women's voices to the 2015 Synod of Bishops. This "accessible and substantive" book is "for all Catholics," with brief, to-the-point essays by 44 "charismatic and prophetic" women from 16 countries on 6 continents. Including eminent theologians and women from many walks of life, the authors wrote because they "believe that the Church cannot come to a wise and informed understanding of family life without listening to women." Review by Luke Hanson, SJ, in 11/28/16 issue of America magazine. From the foreword: "Pope Francis has repeatedly said that he wants a ‘messy’ Church, a Church that is not afraid to take risks in order to live the joyous adventure of faith. This book expresses the messy realities of women's lives, realities that challenge the Church's current practice in many ways, realities that the Church must acknowledge in order to communicate the Gospel to future generations." USA authors include St. Joseph Sisters Elizabeth Johnson and Christine Schenk, Lisa Sowle Cahill, Mercy Sr. Margaret Farley, Dominican novice Rhonda Miska. Order through publisher Paulist Press, Amazon, etc. NCR reviewed the book as “compelling, expansive, diverse.”

Catholic Women Preach: Excellent weekly video reflections on the Sunday readings by women in the USA and around the world, including many women religious. In English.

A Quick Intro to Sisters   -   Looking Back (history)   -   Videos, Etc.   -   Charisms and Congregations
Connect with Sisters   -   Thank You, Sisters   -   Intro to the Leadership Conference of Women Religious (LCWR)
Proudly powered by Weebly